The Rise of Real Time: A Confluent Virtual Tech Talk with Neha Narkhede 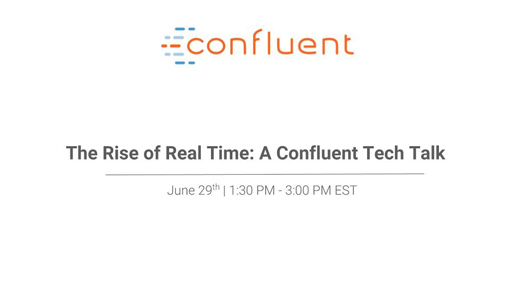 There is a major shift happening in how data powers the core of a company's business. Businesses operate in real-time and the software they use is catching up. Rather than processing data only at the end of the day, why not react to it continuously as the data arrives? This is the emerging world of stream processing. Apache Kafka® was built with the vision to become the central nervous system that makes data available in real-time to all the applications that need to use it.

This talk explains how companies are using the concepts of events and streams to transform their business to meet the demands of this digital future and how Apache Kafka serves as a foundation to streaming data applications.

This Tech Talk will be delivered by Neha Narkhede, co-founder and CTO at Confluent, the company behind the popular Apache Kafka® streaming platform. Prior to founding Confluent, Neha led streams infrastructure at LinkedIn, where she was responsible for LinkedIn’s streaming infrastructure built on top of Apache Kafka and Apache Samza. She is one of the initial authors of Apache Kafka and a committer and PMC member on the project.